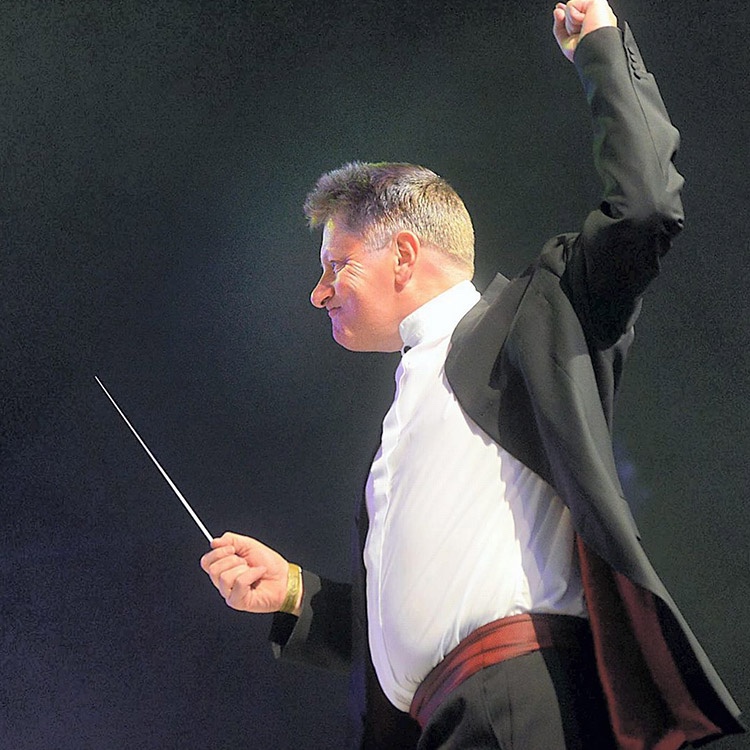 Described by International Record Review as ‘one of the most gifted younger British conductors’, Stephen Bell studied at the Royal College of Music under the renowned conductor Norman Del Mar. He now finds himself increasingly in demand, both at home and abroad, with a wide variety of international orchestras. He was appointed Artistic Director of the City of Oxford Orchestra in 2009 and he was delighted to take up the post of Associate Conductor of the Hallé Pops in 2013.

Stephen’s recent discography includes critically acclaimed CDs on the ASV, Naxos and Dutton labels, including two with the Royal Philharmonic Orchestra, a disc devoted to the music of Gordon Jacob and three world premiere recordings with violist Roger Chase and the BBC Concert Orchestra. 2016 saw three brand new releases, including A Christmas Celebration with the Hallé on its own label and a collaboration with award-winning vocalist Clare Teal on MUD Records. He has extensive broadcasting experience, frequently appearing on Classic FM as well as on BBC radio and television.

His diverse repertoire, versatility and aptitude for communication with audiences of all genres and ages have led to exciting conducting projects with an eclectic range of artists. Past highlights include conducting the Queen’s Jubilee Concert at Chatsworth House, a tribute concert for Stanley Black at the Royal Festival Hall, a gala event for Prince Charles at Windsor Castle, the memorial concert for Alistair Cooke at Westminster Abbey, the award-winning Pitch Perfect for BBC TV’s Children in Need at Wembley with the BBC Singers, the televised Music Nation concert from the Clyde Auditorium in Glasgow, and pop legends Texas with the BBC Scottish Symphony Orchestra at Barrowland, Glasgow, for BBC Music Day 2017.

From 2005 to 2010, Stephen was invited to conduct the annual televised BBC Proms in the Park with the BBC Philharmonic, and since 2011, he has appeared every year on the live TV broadcasts of the BBC Scottish Symphony Orchestra’s Last Night of the Proms celebrations. He made his Royal Albert Hall Proms debut with the hugely successful Doctor Who Prom in 2008, returning in 2012 for a Family Matinee Prom with the Royal Northern Sinfonia and again in 2014 for two televised CBeebies Proms with the BBC Philharmonic. The Folk Prom in the 2018 season marked his first Prom with the BBC Concert Orchestra, returning in the 2019 season.