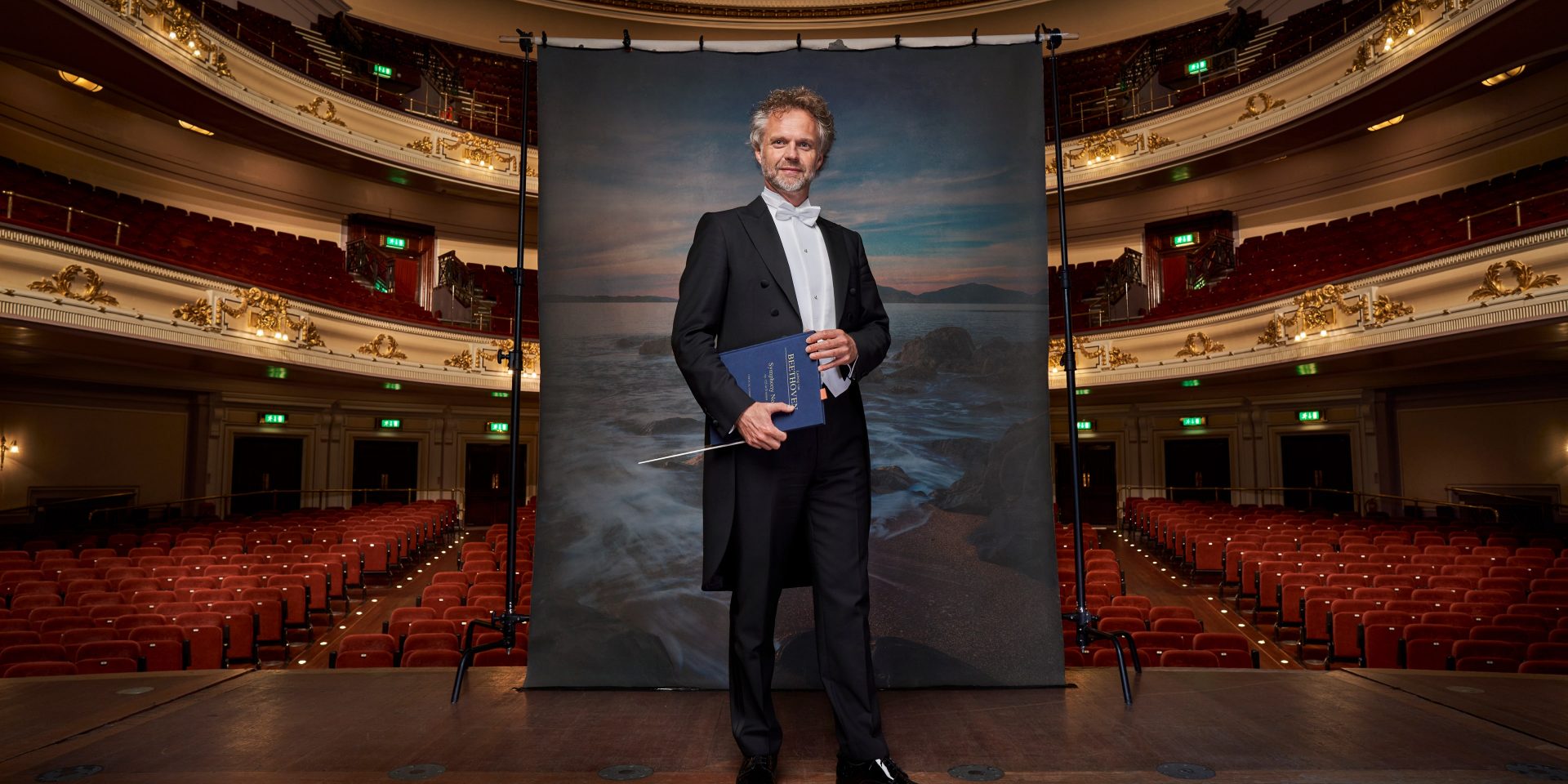 The RSNO’s Spring/Summer Season puts its own musicians at the forefront of programming, highlighting talent within the ranks of the Orchestra and showcasing the work of collaborators from its Composers’ Hub and Scotch Snaps initiatives. Scotland’s National Orchestra also welcomes back superstar violinists Patricia Kopatchinskaja and Nicola Benedetti and introduces Sheku Kanneh-Mason to Scotland’s audiences.

This Season shines a light on talent within the Orchestra, with its Spring/Summer programme putting RSNO players centre stage. The Season opener stars Leader Sharon Roffman as she directs the Orchestra and Scottish pianist Steven Osborne in an unconducted performance of Beethoven’s Fourth Symphony and Beethoven’s Fourth Piano Concerto. Later in the Season, the RSNO travel to Aberdeen as Principal Cello Aleksei Kiseliov performs Shostakovich Cello Concerto No1 under Thomas Søndergård. Principal Horn Christopher Gough performs Mozart’s Horn Concerto in Dundee and Principal Flute Katherine Bryan is soloist for the world premiere of the magical new flute concerto by Jay Capperauld, Our Gilded Veins, a piece commissioned by the RSNO.

Following the success of the RSNO’s first ever Live and Digital Season in the Autumn, three Spring/Summer Season concerts will be offered as live streams from the Glasgow Royal Concert Hall and will be available on demand until 30 June 2022. Audiences across the world can watch Steven Osborne’s Beethoven Piano Concerto No4, Tabita Berglund conducting Sibelius Five and Thomas Søndergård bringing the Season to an emphatic close with Beethoven’s Symphony No9 Choral.

Students from the Royal Conservatoire of Scotland (RCS) will perform side-by-side with RSNO musicians to mark the 175th anniversary of the institution. Performing Strauss’ Alpine Symphony and Jay Capperauld’s Fèin-Aithne this celebratory programme makes for an evening of adventurous sounds exploring breath-taking scenery.

The RSNO is proud to be Classic FM’s Orchestra in Scotland. Five concerts in the Spring/Summer Season are recommended by Classic FM: Steven Osborne plays Beethoven; Søndergård Conducts Rachmaninov Two; Sheku Kenneh-Mason plays Shostakovich; Gershwin & Rachmaninov; and Søndergård conducts Beethoven Nine. Following the recent live stream of Mozart’s Clarinet Concerto in October, Classic FM and the RSNO are working together this Season to develop further digital offerings for audiences across the UK.

The RSNO will be joined by some of the biggest recording artists in classical music, with Nicola Benedetti and Sheku Kanneh-Mason performing alongside Scotland’s National Orchestra. Sheku Kanneh-Mason will perform Shostakovich’s Cello Concerto No2 under the baton of Principal Guest Conductor Elim Chan. Kenneh-Mason rose to international acclaim in 2018 performing at the wedding of the Duke and Duchess of Sussex at Windsor Castle. He has performed with orchestras across the world and released two best-selling albums, with 2020’s Elgar making him the first cellist to reach the UK Top 10.

Supporting new talent from a variety of backgrounds remains at the forefront of the RSNO’s work. In 2020 the RSNO introduced its Scotch Snaps series. Scotch Snaps, supported by the PRS Foundation’s Resonate Fund, the John Mather Trust and the John Ellerman Foundation, celebrates the diversity of composers born or living in Scotland, introducing audiences in Scotland and beyond to their compositions. Five Spring/Summer Season concerts will feature music from the Scotch Snaps series: David Fennessy’s Hirta Rounds; Thea Musgraves’ Song of the Enchanter and Loch Ness – A postcard from Scotland; and Jay Capperauld’s Fèin-Aithne and the world premiere of his Flute Concerto Our Gilded Veins, commissioned by the RSNO.

Two new compositions from the RSNO Composers’ Hub programme will be premiered this Season: Jasper Dommett’s Dreams of Isolation (2020:21 winner) and Carlijn Metselaar’s Into the Living Mountain (2019:20 winner). Composers’ Hub gives early-career composers a rare opportunity to compose for orchestra and gain experience within a major arts organisation. The RSNO hopes that by programming new works alongside some of the most popular repertoire audiences can continue to experience new and inspiring music now and for many years to come.

The aforementioned Scottish premiere of Mark Simpson’s Violin Concerto provides an exciting opportunity for audiences in Scotland to see one of its greatest exports, Nicola Benetti, shine. First performed in London in June 2021, the concerto has been met with critical acclaim and was recently shortlisted for a Royal Philharmonic Society award.

The RSNO will perform alongside the BBC Scottish Symphony Orchestra to mark the 2022 Association of British Orchestras Conference in Glasgow. María Dueñas joins the orchestras for Shostakovich’s Violin Concerto No1 alongside the UK premiere of Canadian composer Samy Moussa’s Elysium.

RSNO at the Movies

The RSNO will mark John Williams’ 90th birthday with music from some of his most memorable scores, including Star Wars, E.T. the Extra-Terrestrial, Jaws and Jurassic Park. With over 50 nominations and five awards, no film composer has conquered the Oscars as completely as John Williams. This concert will get audiences in the mood for the 94th Academy Awards ceremony whilst celebrating the iconic composer’s 90th birthday in style, with a full-scale symphonic tribute.

Star Wars fans can feel the force of Scotland’s National Orchestra in May, as Stephen Bell conducts an epic evening of featuring everyone’s favourite themes from the blockbuster saga.

“It is a great privilege to announce this new series of concerts. Following a successful Autumn Season, we are back and are now able to perform to full concert halls. Continuing our ambition to deliver thought-provoking repertoire and exciting new names alongside RSNO favourites, we hope that there will be something for everyone this Season.

Our audiences have continued to show an appetite for digital content even as the world has opened up again, and we are happy to strengthen our digital output with three more live-streamed and on demand concerts this Season, bringing symphonies by Beethoven and Sibelius to homes across the country.”

“I am thrilled to return for this second half of the RSNO’s 21:22 Season and especially happy to be celebrating the talent of my colleagues in the Orchestra. We will be filling concert halls in Scotland with the vast sounds of Rachmaninov, Elgar and Strauss alongside the work of promising young composers which for me gives the greatest excitement leading the Orchestra.”

The RSNO is supported by the Scottish Government and local authorities in Scotland.

Partnerships are crucial to the work of the RSNO. We aim to facilitate local, national and international partnerships with cultural, commercial, public, charitable and community organisations in order to increase and sustain the impact, reach, reputation and contribution of the Orchestra’s work. We are also building partnerships that will help us achieve our climate targets as outlined in the RSNO’s Environmental Policy.

The RSNO continues to strengthen its reputation for delivering rewarding programmes for its corporate partners and sponsors, helping to build profile, serve local communities, engage staff and customers and generate inspiring stories.

ScotRail will continue to be the RSNO’s Principal Transport Provider, a partnership which reduces the environmental impact of the RSNO’s touring schedule, encourages concertgoers to take the train to concerts and supports ScotRail’s commercial activities across Scotland.

Capital Document Solutions continues its generous support of the RSNO’s photocopying and document management services. As part of this partnership Capital Document Solutions sponsors a series of concerts across the season, with opportunities to build the company’s brand and gain access to hospitality at concerts, helping to develop relationships with staff and clients. This partnership is now in its fourteenth year.

The RSNO is proud to be Classic FM’s Orchestra in Scotland, as its Principal Media Partner.

The RSNO continues its cultural partnership with the Institut Français Écosse, an association which supports Franco-Scottish cross-cultural collaboration.

The RSNO is delighted to announce a new partnership with Trees for Life and is proud to be supporting their mission to rewild the Scottish Highlands by restoring the globally unique Caledonian Forest. The RSNO would like to thank all its sponsors, corporate partners, media and broadcast partners and project partners who make a crucial contribution to the work of the Orchestra.

The RSNO is also deeply grateful for the generosity of its individual supporters. Our Conductors’ Circle and Patrons are a vital part of our annual fundraising. As a charity, we also rely upon a wide range of generous support from Trusts and Foundations.